Reporting from the British Grand Prix at Silverstone.

The first practice of the 2017 British Grand Prix was fairly quiet, with the most action being a couple of off-track slides during the hour and a half session.

Antonio Giovinazzi replaced Haas’ Kevin Magnussen for this session, although the Dane returned to the track in FP2.

The session began with Ferrari’s Sebastian Vettel testing the proposed ‘shield’ cockpit protection for a few laps. Soon after the shield was removed, the German spun at Becketts, which turned out to be the most exciting moment of the session. The session began with teams opting to use the medium and soft tyre, with drivers such as Ferrari’s Kimi Raikkonen, Red Bull’s Daniel Ricciardo and teammate Max Verstappen vying to get the fastest time.

Soon it was clear that Mercedes seemed to have the edge over the rest of the field, and with an hour to go, Valtteri Bottas got his times down to the 1.29s. This saw Bottas and teammate Lewis Hamilton competing to get the quickest time, as the Silver Arrows stretched their lead by half a second over the Red Bull’s, who in this session, were the second fastest team.

By the end of the session, Bottas topped the timesheets, followed by Hamilton, Verstappen, Ricciardo, Raikkonen and Vettel to complete the top six.

Although Mercedes seemed to be stretching ahead, practice sessions are not always reflective of true pace. 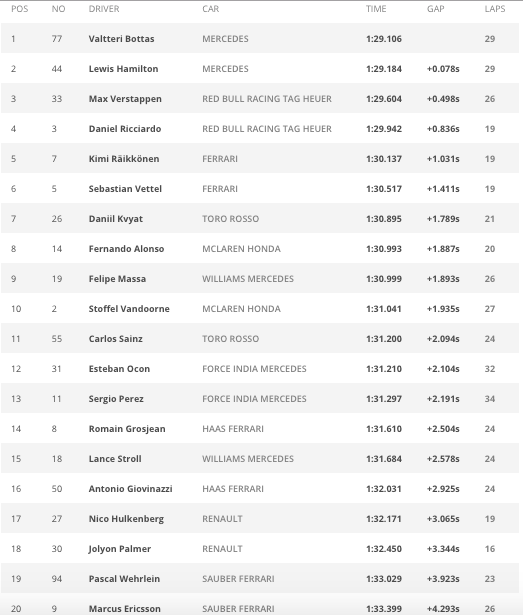 The second practice session saw an increase in the use of soft and supersoft tyres, with barely any teams opting to use the medium.

Again, the 90 minutes of the second session saw little dramatic action, as the teams focused on collecting data for the weekend.

Reflecting FP1, Mercedes topped the timesheets once more, with Valtteri Bottas setting the fastest time once more. However, Ferrari were the ones who seemed closer to Mercedes, followed by Red Bull.

FP2 saw yet more spins from Kimi Raikkonen and Williams’ Felipe Massa, who both spun into the gravel at Becketts.

Massa and Verstappen, after jostling for position on the start finish straight, were under investigation, however, at the time of reporting, a verdict has not been reached.

With less than half a second covering the top four, it’s all to play for tomorrow in FP3 and Qualifying.