Mercedes’ Nico Rosberg continued his dominant streak as he topped the timesheets today in the final practice of the weekend, although teammate Lewis Hamilton and Ferrari’s Kimi Raikkonen were prevented from showing their true pace.

Despite his step-in with Raikkonen, Palmer, and his teammate Kevin Magnussen showed good form during the session, coming eighth and ninth on the timesheets.

Finishing 12th, Haas’ Esteban Gutierrez was the cause of the most dramatic moment of the session, after spinning at Turn 5, as mechanical gremlins left Toro Rosso’s Carlos Sainz down at the bottom of the timesheets. 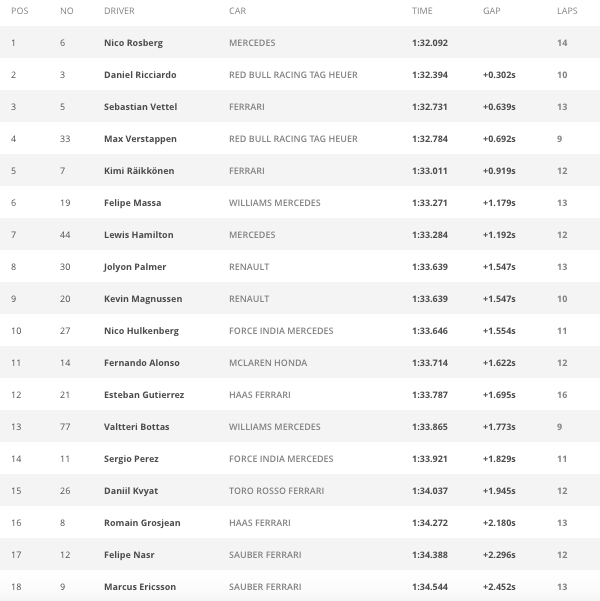 Nico Rosberg will start tomorrow’s 2016 Japanese Grand Prix from pole position, after beating teammate Lewis Hamilton by just 0.013s, making it the 10th time this season that Mercedes have locked out the front row of the grid.

With Ferrari and Red Bull battling and breathing down the necks of the Silver Arrows, it was Kimi Raikkonen who won out in the end, securing third place on the grid, ahead of teammate Sebastian Vettel.

However, the German will have to sacrifice his place to Max Verstappen, who provisionally sits behind him on the grid, due to the fact that Vettel received a grid penalty for his early clash with Rosberg in Malaysia. Vettel will begin the race in 7th.

A good session for Haas, as Romain Grosjean managed to secure eighth place, after putting his earlier brake problems behind him. Teammate Esteban Gutierrez also managed to make it into Q3, and will start tomorrow in 10th.

Williams failed to make it into the top ten for the second time in three races, as drivers Valtteri Bottas and Felipe Massa got bogged down in a late spurt of laps.

At Honda’s home Grand Prix, McLaren drivers Fernando Alonso and Jenson Button will start 15th and 17th, after a frustrating qualifying for Button, for what will potentially be his final Japanese Grand Prix.

Manor’s Pascal Wehrlein has also been penalised 5 places due to an unscheduled gearbox changed, however this does not affect his starting position due to the fact he qualified last on the grid.

Diary of a Motorsport Journalist
Waiting for Herbs: Student Cooking

Recipes for a student budget

Reporting your news in Suffolk (UK), motorsports, and reviews.

Muttering, musing and mirth from the world of Formula One.

A blog on all things Formula 1

The less serious blog about Motorsport!

F1: Daily International News roundup, inside whispers and insight together with thoughts and opinion

Into The Kitty Litter