Mercedes’ Nico Rosberg topped the timesheets this morning at Monza, ahead of teammate Hamilton and the two Ferrari’s of Kimi Raikkonen and Sebastian Vettel.

The session began with Force India’s Sergio Perez, McLaren’s Jenson Button and Red Bull’s Max Verstappen testing out the proposed ‘halo’ cockpit concept as one of the options for a new safety feature to be introduced in 2018.

Ferrari have also used up their three remaining tokens on upgraded engines for both cars for their home Grand Prix, however they were not used in the first practice session and it is believed that they will be used from tomorrow morning.

We also saw more testing of Pirelli’s proposed 2017 soft tyre, which many drivers, including Raikkonen, Vettel and Rosberg, utilised.

Out of the two Mercedes’ it was Hamilton who initially set the ball rolling with the fastest time, which was then subsequently beaten by Rosberg, as the two went back and forth, alternating between 1st and 2nd, before then changing onto supersoft rubber.

After this, Raikkonen set the 3rd best time on the soft tyre, who had been told that he had restricted mileage, with Vettel just behind.

Williams’ Felipe Massa’s car sat in the garage for quite a bit of the session, with a boost problem with his turbo. However, he managed to go out later on and finished 14th.

It wasn’t the best of morning for Red Bull, who expected to be behind the two Ferrari’s, however finished in 8th and 10th, with drivers Verstappen and Daniel Ricciardo, with the Haas of Esteban Gutierrez splitting the two.

Further back, Manor’s Esteban Ocon impressed by finishing in 18th fastest time, the top of the two Manor’s, a second ahead of teammate Pascal Wehrlein, whose DRS later malfunctioned.

Near the end of the session, McLaren’s Fernando Alonso met problems, where his car was stuck in gear, leaving him to trail slowly back towards the pits. 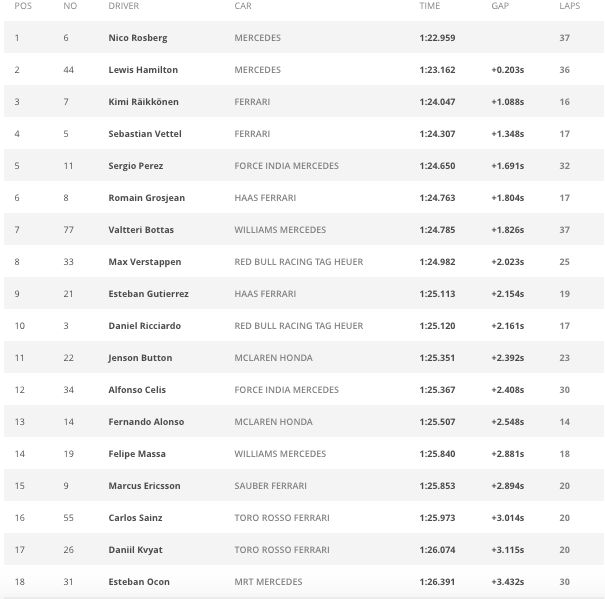 The second practice this afternoon was dominated yet again by Mercedes, with Lewis Hamilton clocking the fastest time, followed by teammate Nico Rosberg.

The Ferrari’s of Sebastian Vettel and Kimi Raikkonen followed, managing to stay ahead of the Red Bull’s of Max Verstappen and Daniel Ricciardo.

It wasn’t a great session for McLaren’s Fernando Alonso, who was bogged down at the beginning of the session with a hydraulic leak, a problem that had shown itself at the end of FP1. The team replaced the connector between the engine and the gearbox, which luckily did not give him any grid penalties, and he was out later in the session.

However, it was not all over for the Spaniard. Nearer the end of the session, after he managed to get some running time, however he was pushed back into the pits due to a clutch problem- a re-surgence of the hydraulic issue. Luckily, he was able to go back out once more.

Verstappen was also late going out due to a front brake problem on his Red Bull. Fortunately, this was soon fixed and the Dutchman was able to get out on track with no further problems.

It was also a troublesome session for Manor’s Esteban Ocon. His car rolled to a halt on the approach to Lesmos, which brought out a double yellow flag and then the virtual safety car.

Sauber’s Felipe Nasr also saw problems. After engine problems in FP1, he complained of a loss of power in his car in this second practice session.

Williams’ Felipe Massa’s car was also delayed due to an issue with his brake sensor, although he was able to go out for the final seven minutes of the session.

We also saw more testing of Pirelli’s concept tyre for 2017 nearer the start of the session. 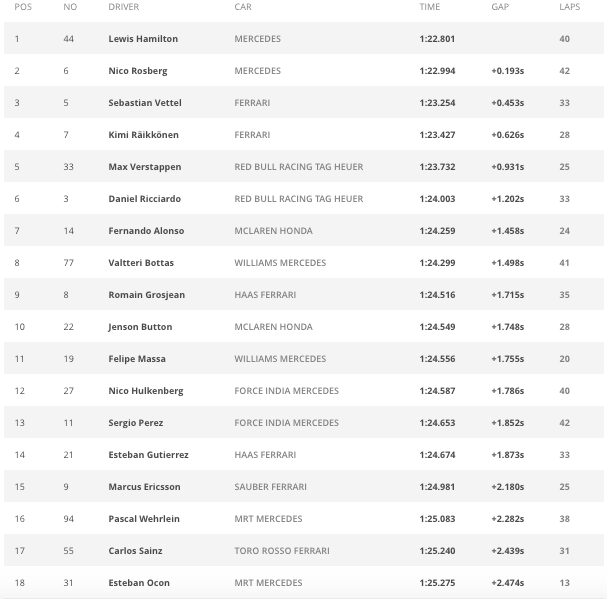 Diary of a Motorsport Journalist
Waiting for Herbs: Student Cooking

Recipes for a student budget

Reporting your news in Suffolk (UK), motorsports, and reviews.

Muttering, musing and mirth from the world of Formula One.

A blog on all things Formula 1

The less serious blog about Motorsport!

F1: Daily International News roundup, inside whispers and insight together with thoughts and opinion

Into The Kitty Litter