Mercedes’ Nico Rosberg topped the timesheets this morning at the Spa-Francorchamps circuit, with teammate Lewis Hamilton 0.730 seconds behind, and Ferrari’s Kimi Raikkonen coming in third.

Behind Raikkonen, Force India’s Sergio Perez split the two Ferrari’s, finishing with a time of 1:49.247 as his best, with the two Red Bull’s of Daniel Ricciardo and Max Verstappen following.

During the session, we saw testing of Pirelli’s prototype tyres for the 2017 season, which had been modified in order to resist impacts against kerbs and other similar objects. All teams have been given two sets per driver to test in the first two practice sessions, and will then share the data with Pirelli.

Rosberg was one of the drivers to test the halo cockpit protection, one of the possible cockpit safety measures to be introduced in 2018.

It was a particularly challenging morning for McLaren. Jenson Button finished the session in 18th place, after complaints about oscillations in his gearbox. Teammate Fernando Alonso, however, had an even worse morning, as he only completed three laps, not recording an official lap time, with a water leak from his car’s ERS holding it in the pits. He later had to receive a new power unit, giving him a grid penalty.

After replacing his MGU-H and turbocharger again, Mercedes’ Lewis Hamilton is now on his seventh of the two, meaning that he is set for another fifteen-place grid penalty. However, this latest change did not affect the Brit, as he is already set to start at the rear of the grid, after a total of a 30-place grid penalty. In this session, he finished 13th.

A strong session for Haas, with drivers Romain Grosjean and Esteban Gutierrez completing the practice in 8th and 10th place, with McLaren’s Jenson Button finishing in ninth to make the top 10.

The session finished without major incident, apart from a brief Virtual Safety Car period following the stopping of Renault’s Jolyon Palmer, who was luckily able to re-start his car again whilst in the run-off area and returned to the pits. 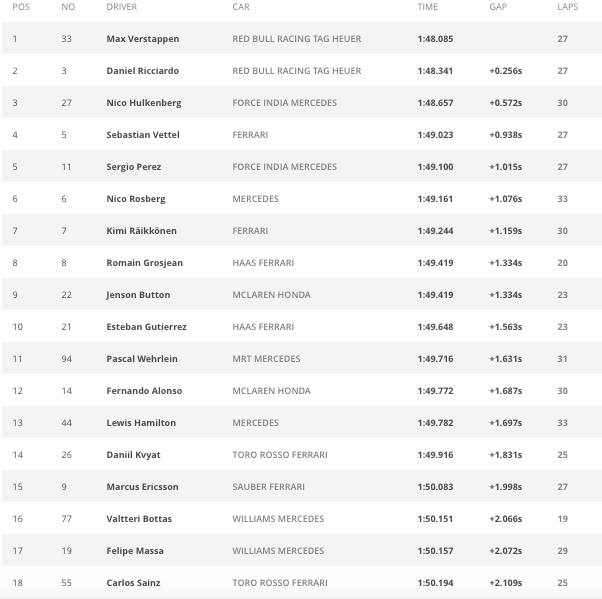