Today [17th July 2016] marks one year since the day that French driver Jules Bianchi left us,  after a nine month battle in a coma following an incident at the 2014 Japanese Grand Prix.

I want to commemorate and celebrate his life rather than entirely focus on his premature death, so I am going to take a look into his driving career and what made him as successful as he was.

Bianchi was first exposed to the world of motorsport at the young age of three, particularly by the fact that his father was the owner of a karting track.

In the later months of that year, Bianchi signed to compete in the Formula 3 Euro Series, finishing 3rd in 2008. He continued with them for 2009, alongside Williams’ Valtteri Bottas and Haas’ Esteban Gutierrez. He was a victor a total of eight times during that season, leading him to grab the title. It was clear from a young age that Bianchi had talent. 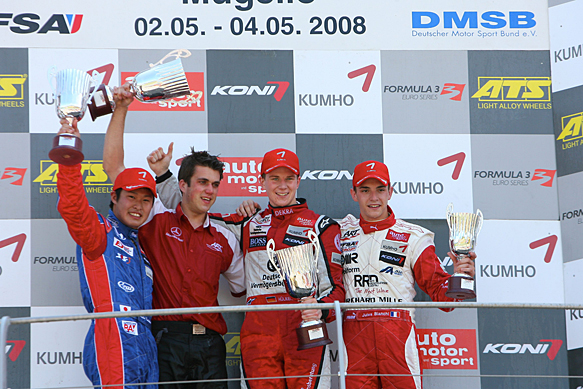 Moving into GP2, Bianchi was signed with ART Grand Prix, and competed in three of the four rounds in the Asia Championship of GP2. In the main GP2 championship, he scored two pole positions and several points before his injury at a crash in Hungary, which led to a fracture in his vertebra, however he was able through quick recovery to take part in the next round.

Bianchi still remained with ART for the duration of the 2011 season, and was teammates with current Haas driver Esteban Gutierrez. His notable drives were during the Asia Series of the sport, where he managed to hold off current Haas driver Romain Grosjean in order to gain a victory. He finished second in the driver’s championship, behind Grosjean. In the main GP2 series, he finished third.

Another of his notable drives was when he managed to hold off Christian Vietoris in 2011 at Silverstone, enabling him to take the win. It was times such as these where Bianchi’s true talent and determination shone through.

In 2012, Bianchi chose to move to the Formula Renault 3.5 Series, where he signed with Tech 1 Racing, and finished second in the title race, just missing out on first place.

Back in 2009, the Frenchman was linked to the second Ferrari F1 seat which was being held by Luca Badoer during Felipe Massa’s absence in the sport. Bianchi then went through a short testing period for Ferrari in 2009, driving for two of three days.

In November of 2010 Bianchi was then announced as the reserve and test driver for the 2011 season. During this time, Bianchi doubled as a GP2 driver and a test driver for Ferrari, however in 2012 he was lent to Sahara Force India, where he drove in a total of nine free practice sessions over the course of the racing season.

In early 2013, Manor Marussia announced that they would be replacing Luiz Razia with Bianchi, after Razia’s contract was prematurely ended due to sponsorship problems. In his first grand prix, Bianchi qualified nineteenth on the grid, out-qualifying his teammate Max Chilton.

In the race, Bianchi finished fifteenth, after overtaking Pastor Maldonado and Daniel Ricciardo on the first lap of the race. For his debut in the sport, it was an impressive display. By the Hungarian Grand Prix of that year, Bianchi had beaten Chilton in all of the qualifying sessions and races that both had taken part in.

In October of that year, Manor Marussia confirmed that they were going to retain Bianchi for the 2014 season. The most impressive spectacle of that season was at the Monaco Grand Prix, where he overcame the odds and finished ninth, the highest finish that has ever been achieved by the team, gaining two points. 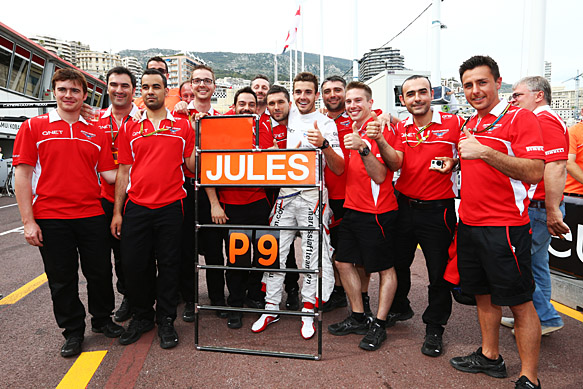 Bianchi managed to overcome a total of three penalties to finish an astonishing ninth; a real display of the raw talent and pure grit and determination he had.

The day before Bianchi’s accident at Suzuka, he announced that he was ready to step into the seat at Scuderia Ferrari if the team needed him, due to the oncoming departure of current McLaren driver Fernando Alonso.

I don’t want to write too much about Bianchi’s accident, due to the fact that this post is primarily looking at his life and racing career, and I don’t want the brilliance of his racing to be overshadowed by the accident, however, I will mention it.

During the race at the 2014 Japanese Grand Prix, Bianchi lost control of his car and was headed towards the run-off area. However, he collided with the back of the tractor crane which was in the process of removing Sauber’s Adrian Sutil’s car after he had spun off the lap before. Due to this accident, the race was stopped, as Bianchi was found unconscious and was transported by ambulance to the nearest hospital. He was admitted to intensive care after sustaining severe head injuries.

At the next race, the Russian Grand Prix, drivers showed their support for Bianchi by creating several tributes such as the wearing of a sticker saying “Tous avec Jules #17”, meaning “We’re all with Jules #17” by every driver on the grid, a minute’s silence held before the race, Lewis Hamilton, the victor of the race, dedicated his win to Bianchi, and Marussia wrote “#JB17” on the sides of its cars.

Following Bianchi’s death on the 17th July 2015, the number seventeen has permanently been retired, meaning that no other driver can use it out of respect for him. Many tributes have been made to him over time, particularly at the Hungarian Grand Prix, where a minute’s silence was observed before the race. 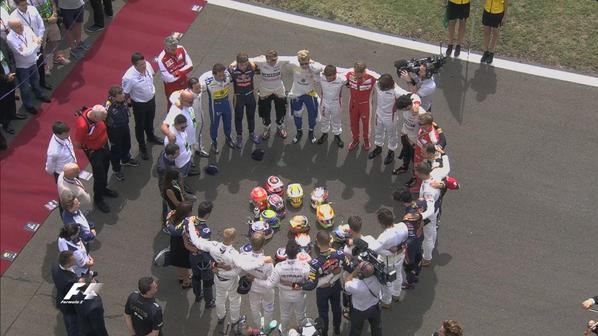 The winner of the race, Ferrari’s Sebastian Vettel, pointed to the sky whilst he was on the podium, dedicating his win to Bianchi. 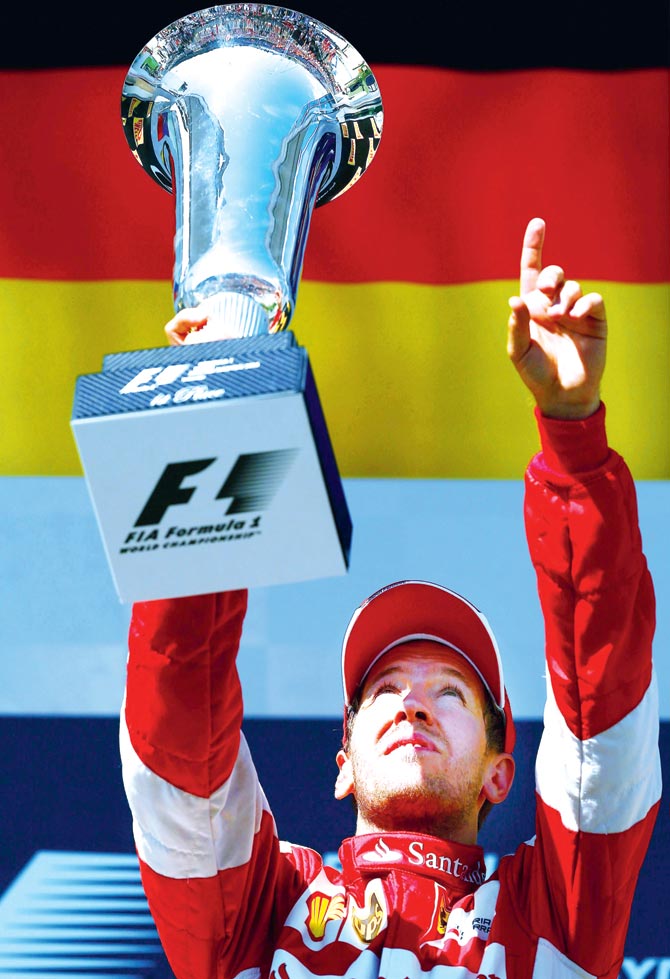 There were also many tributes to Bianchi seen at the race, seen on cars, helmets, hats, you name it. It was clear that Bianchi had done something that was seen as almost impossible, among other things: he had brought the grid together, united all the drivers. 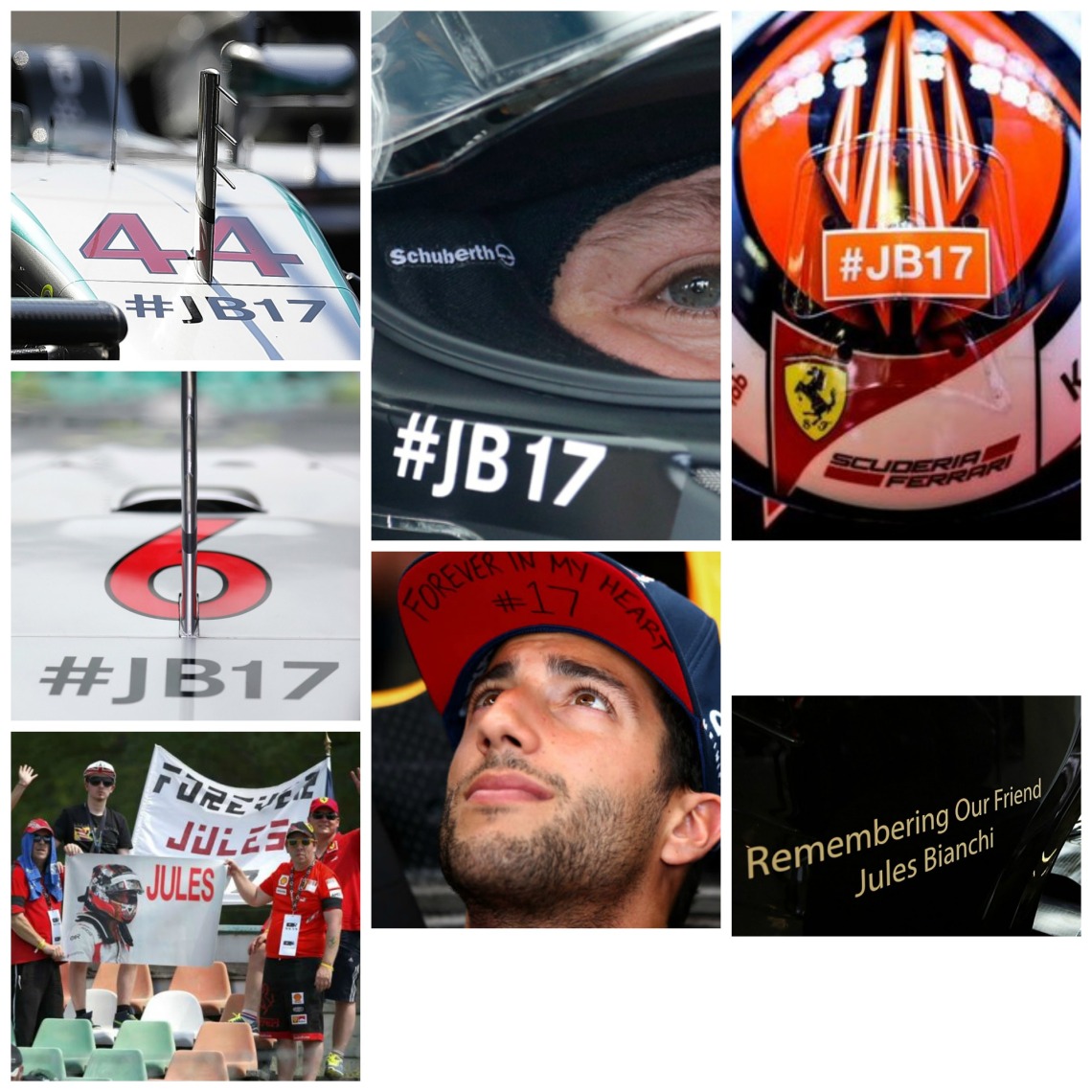 One year has passed since Jules Bianchi left us, and everyone can agree that he left us too soon. A truly gifted and talented driver, who brought so much to the grid, he will never be forgotten. He and his family and friends are in our hearts. Rest in Peace Jules. 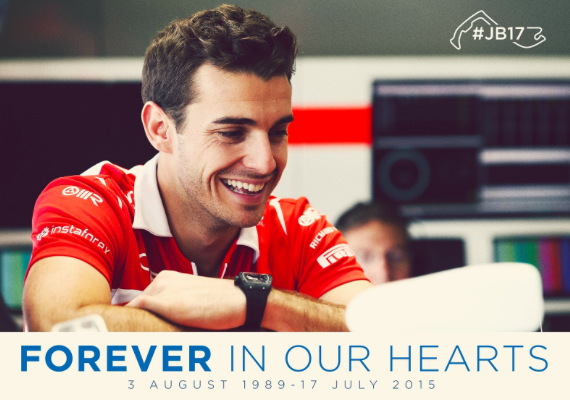