Hamilton topped the timesheets yet again this morning at Silverstone after red flags were waved following a wipeout from Sauber’s Marcus Ericsson.

However, most of the events that took place over the hour were overshadowed by Ericsson’s crash, as he hit his left-rear wheel on the edge of the curb, sending him into the tyre wall. Luckily, Ericsson was able to exit the car unharmed, although had to attend the hospital for precautionary medical checks so was unable to take part in qualifying, however his car did not fare so well, with three of the four wheels were hanging off the car.

Luckily, the session was able to restart, with a mere five minutes left. This saw a flurry of cars come out onto the track, attempting to set faster and faster lap times. Mercedes’ Nico Rosberg was unable to catch teammate Lewis Hamilton, with only 0.063s between the two drivers. The two Red Bull’s of Daniel Ricciardo and Max Verstappen followed, within a second of Hamilton.

At the end of the session, Vettel slowed and reported gearbox problems with his car. He now has received a five-place grid penalty as he has had to have a new gearbox installed in his car. 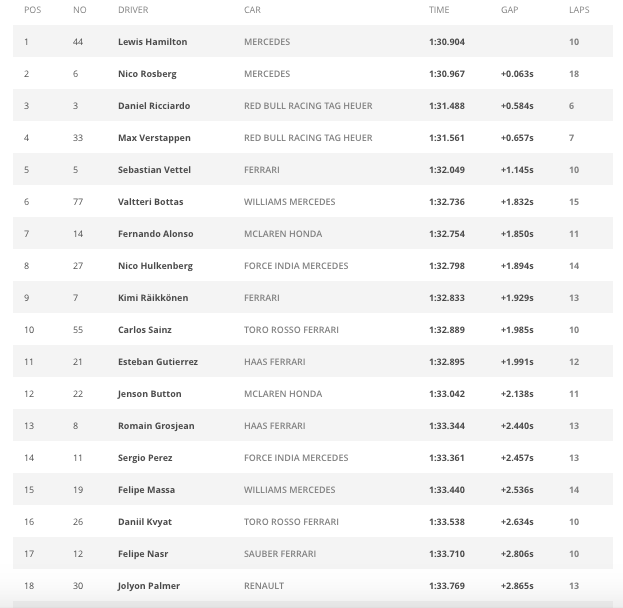 Despite the first two of his times in Q3 being deleted due to exceeding track limits, Hamilton managed to put in a quick lap with seconds to go to secure himself a first place spot on the grid.

Ferrari’s Kimi Raikkonen finished fifth, with teammate Sebastian Vettel sixth, but set to drop to eleventh place after he received a grid penalty following a gearbox change. Williams’ Valtteri Bottas qualified seventh on the grid, followed by Toro Rosso’s Carlos Sainz and Force India’s Nico Hulkenberg and McLaren’s Fernando Alonso following their times being discounted in Q3 after they exceeded track limits during the lap.

As well as Button, Renault’s Jolyon Palmer was knocked out him Q1, as was Manor’s Rio Haryanto and Pascal Wehrlien and Sauber’s Felipe Nasr.

Hamilton yet again beat Rosberg in Q3, however his time was quickly discounted after stewards discovered that he had violated the track limits at Copse corner, sending him plummeting to the bottom of the leaderboard, the time ticking for him to set an official lap time. Luckily for the home crowd, Hamilton delivered and managed to pip Rosberg to the post, qualifying first at his home Grand Prix.

Penalties applied, the grid lines up as follows: